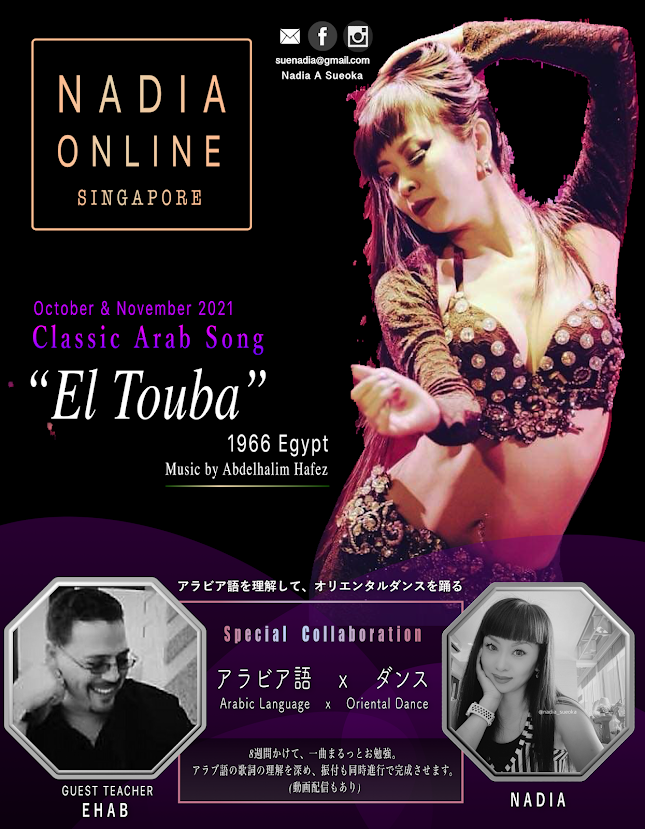 
Thank you for waiting!
New term starting in October! :)


The last August term "Understanding Arabic and dancing Oriental dance" was really popular and we received a lot of wonderful feedback, so I would like to ask Mr. Ehab, who is extremely busy, to overdo it again. You will be able to take part in the October term of NADIA ONLINE!


I think this is a very valuable opportunity.
If you are interested in it, please join us.


In addition to the basics of dance, choreography, and yoga, you can also learn Arabic.
We, as NADIA ONLINE, are super desirable, luxurious online lesson community, aren't we?


We are now starting to accept applications for new students now. 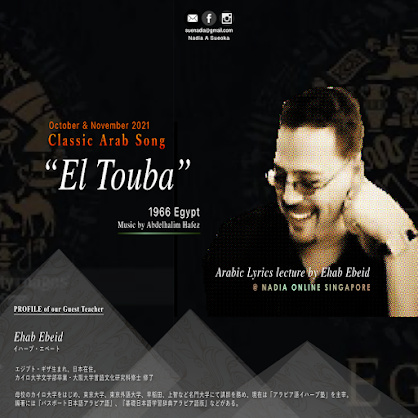 He has been a lecturer at prestigious universities such as Cairo University, the University of Tokyo, Tokyo University of Foreign Studies, Waseda, and Sophia University, and currently presides over the "Arabic Ehab School". He has edited and published "Passport Japanese Arabic", "Basic Japanese Learning Dictionary Arabic Version", and many more.
In the class, Mr. Ehab not only translates the lyrics and teaches them, but also focuses on the songs, the outlook on the life of composers and singers, and the history in the Middle East including Egypt when they lived. He tells us more and more interesting stories about song's cultural background and how he actually felt as an Egyptian when he were a child.
It's hard to go on a trip because of the COVID, but while listening to his lecture, I feel like I'm experiencing a digital trip (time trip) to a foreign land, especially good old days of Egypt.
He is better at Japanese than Japanese, and not only is the explanation easy to understand, but the characters are very cute. There are many students who find the talk interesting and having fun!
Nadia bought the glasses because Mr Ehab looks good on them, so she wanted to imitate the fashion of glasses to look more intelligence!  :p
How you think? :p 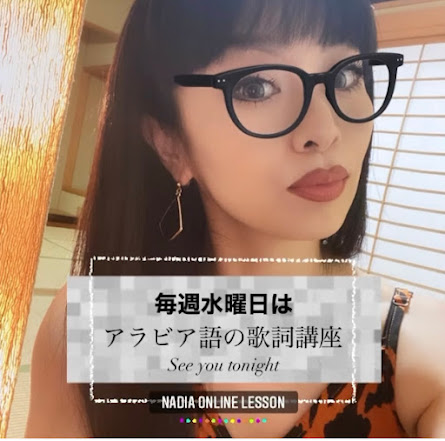 Feeling like a student at "Ehab University", I take lessons every Wednesday night with you. 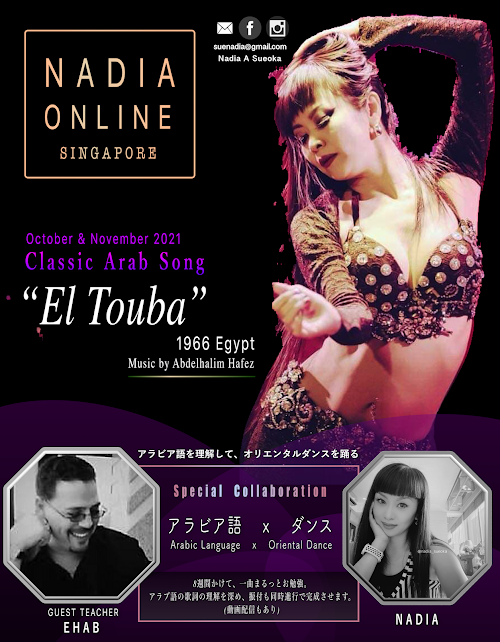 By the way, the song that you will learn with us is, 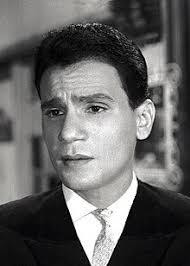 "El Touba" is one of the masterpieces sung by Abdel Halim Hafez.

Personally speaking, when I think "Oh, I like this song", it's often a song by Abdel Halim Hafez. Other famous songs such as "Gabbar" and "Nebtidi Mnein El Hikaya" that you might have heard once while learning bellydance are also sung by him.

He is one of the four major stars who shined in the golden age of Arabic music, he was on a par with such stars like, Umm Kulthum, Mohammed Abdel Wahhab, Farida Atrash.

"El Touba" (official name: Ana Kull Maguul El Touba), which he sings, said, "I said I am not going to be in love with anyone anymore, but I am again in fall in love with you♪" !! It is such a song that sings.


Moreover, the lyrics use the Saidi dialect in some sentences, and it feels a bit rustic. The lyricist of this song, El Ab Nudy is from Saidi area which located at upper Egypt, so I think he was particular about Egyptianness on this lyrics.


However, the composer Balig Hamdi who composed the song to this lyrics was influenced by the West, and the playing method and melody line of the instrument that would have been quite novel at that time.


Because the song was released in a very modern way, there was a disagreement between the lyricist Nudy and the composer Hamdy, and after the release, there was a quarrel.


When a modern feeling influenced by the West suddenly comes into the traditional Egyptianness and the aesthetic sense of Arab music that has been preserved since ancient times, it is positively regarded as novel and interesting. Or do you take it negatively that you can't protect the old ones? It's easy for us to imagine how the pros and cons swirl among them.


How do you guys think about it?


Meanwhile, the popular singer Abdel Halim Hafez sang a big hit, and it is still known as one of the Arab music loved by many as a popular song when you bellydance.


Would you like to know the content of these lyrics, which are mixed with such a cute countryside odor?


Again, let's go back in time to Egypt in the 1960s when the song was released and listen to various historical and cultural stories while having Mr. Iherb explain the Arabic language for all of us.


Music is fun and galant, I am sure you can enjoy dancing with it.
I made a nice choreography with VEIL, please prepare the veil.


The previous song, Ya Msafer Wahdak had a moist view of the world, so this time El Touba wants to dance with a cheerful feeling.


It's a wonderful song and work suitable for the last term of this year 2021, so I would like many people to participate.


If you are interested, please send a message to Nadia.
suenadia@gmail.com 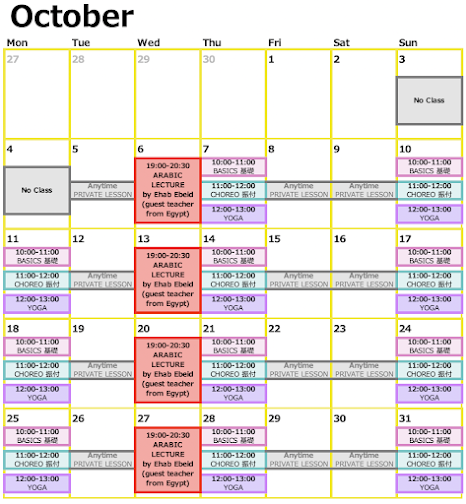 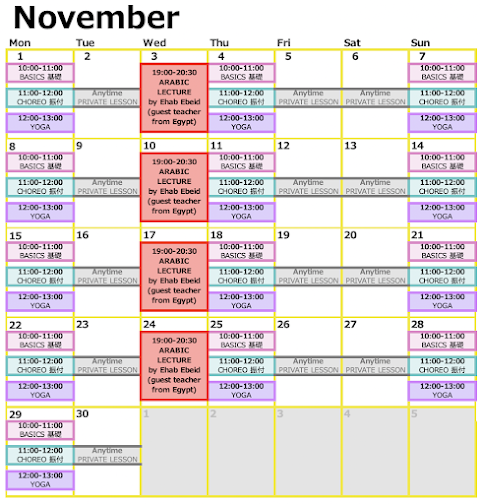 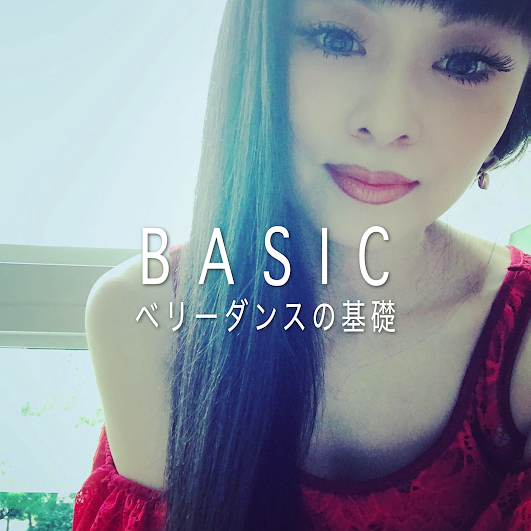 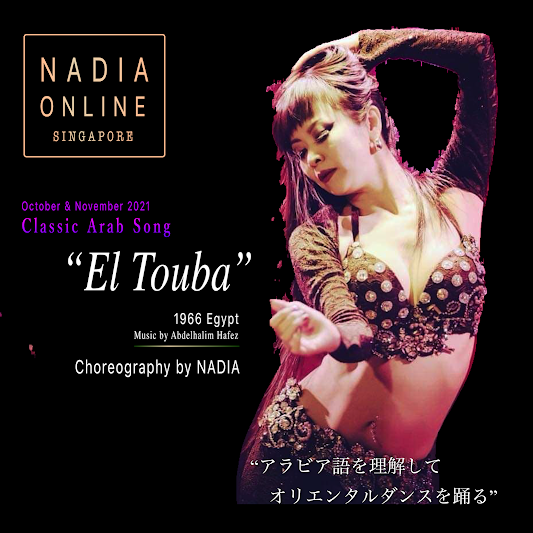 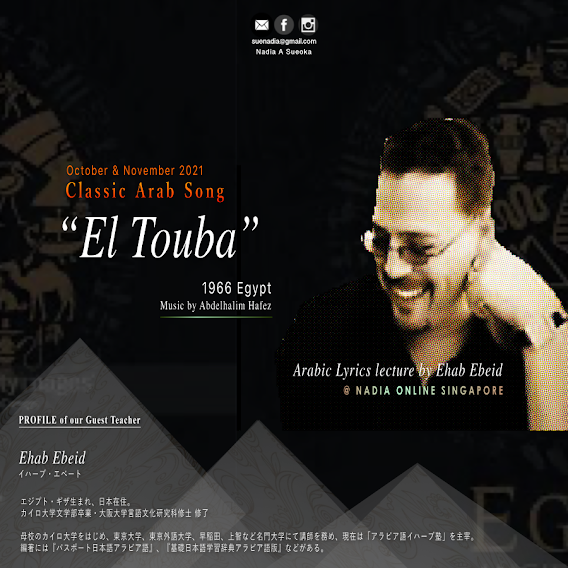 ARABIC LYRICS CLASS
Summer special project! 90-minute special lesson is held every Wednesday. Let's study the lyrics of one song in all eight weeks. Also, as a special bonus, Mr Ehab would like to teach 4 Arabic letters each week in the lesson, and by the end of 8 weeks, we will conquer all 28 letters. Please prepare the writing utensils, notebooks, and materials to be sent and print out them.
There is also a movie to be sent to all participants for those who missed the class.
- - - - - - -
Evening Lessons ▶︎ Every Wednesday
| ARABIC 19:00-21:30 | (90min)
- - - - - - - 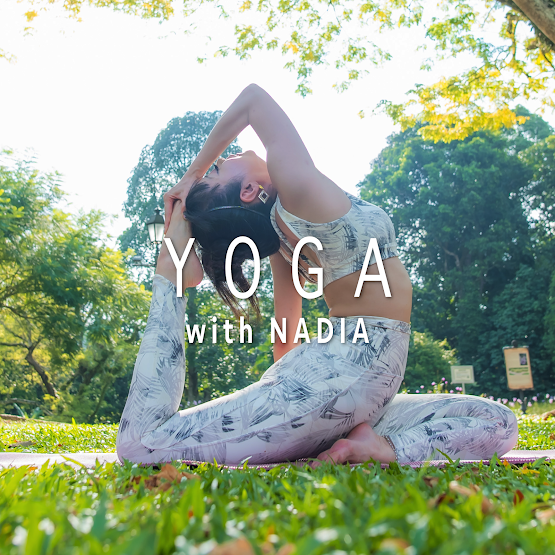 YOGA is the Sanskrit word for "connection" and refers to the state where the mind, body and soul are connected. It combines breathing, posture, and meditation to relieve tension in the body and mind, and stabilise and ease the mind.

Yoga poses which calls "Asanas" have the effect of correcting body distortions, improving flexibility and physical fitness, etc., but combining relaxed breathing and meditation enhances concentration and a gentle and stable mental state.

The effects of breathing on the body and mind are so deep. The breathing method, which is also the basis of yoga, increases vitality and concentration by controlling breathing, and connects the mind and body.

It also has the effect that oxygen is sent to each cell and activated from inside the body. By expanding and contracting muscles and deep breathing, the lymph flow and blood circulation are improved, and the internal organs are activated, your body refreshed and comfortable, but it also helps prevent skin aging.


【ONLINE LESSON on Zoom】
■ Fee : $150 → 48 classes, you can attend as much as you want!
■ Promotion : $250 for 2 month ($50 worth). 2months package
■ Initial fee : Free
■ Trial/Drop-in : We do not open at this moment.
■ There are no special fee for only Yoga class or Arabic class , all in one package. The lesson fee is set to the lowest price by minimizing the procedure. Thank you for your understanding.

【What to provide?】
- Your full name
- Email address (use for sending songs)

【Which App to download?】
- Zoom (used in lessons)
- WhatsApp (used for video distribution)

【How to settle payment?】
- Bank transfer / PayNow (details will be sent you after you applied)
- Peatix https://nadiaonline-aug-sep.peatix.com/view

【Lesson Schedule】
Sunday, Monday, Wednesday, and Thursday. See the calendar on attached. Pink, blue, purple, and red slots are eligible. On other days, it is a private lesson slots to be used (online/offline is possible).

【Private Lesson】
Nadia will teach you anything at anytime on your request. She accepts one-on-one private lessons or semi-private instruction. It is also possible to teach the choreography brush-up that you are currently learning in the online lesson, as well as some advise about stage work for your upcoming performance! Contact her if you are interested. (There are some special discount for online lessons students too. Please ask!)

【Offline class】
As of now, Singapore is in semi-lockdown and offline classes are cancelled. We will inform you on this page when it resumes.
【Others】
We use a veil for choreography. Also, please bring yoga mat, towel and water, as well asa a hip scarf to wrap around your waist. In the Arabic class, we will also hand out materials. If you can print it, please print it and prepare it. Materials will be sent by the day before the lesson. Please also bring your writing utensils.
Any questions? Do not hesitate to ask Nadia.
suenadia@gmail.com 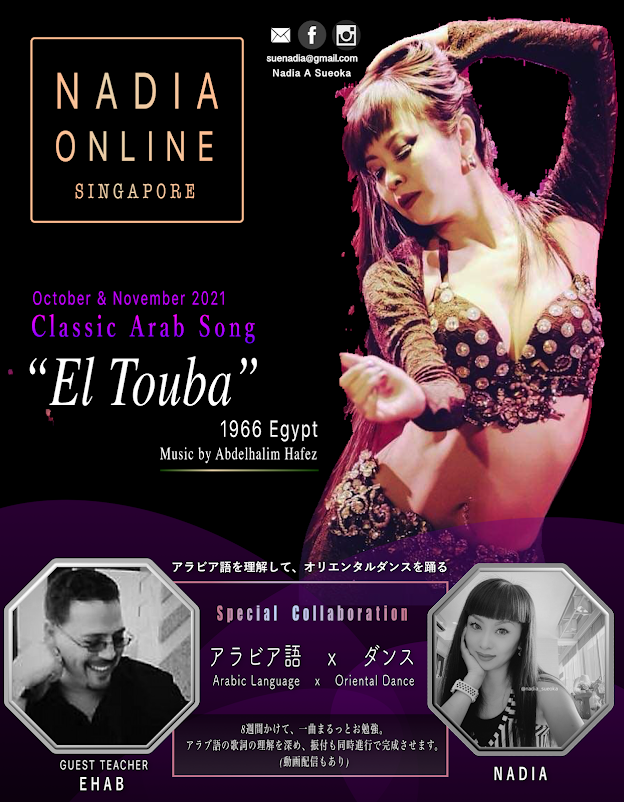 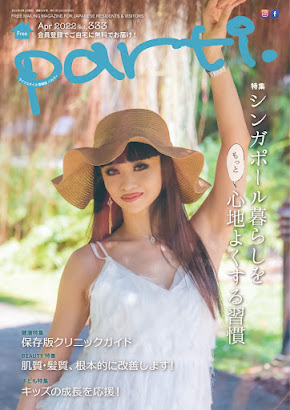 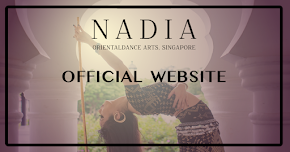 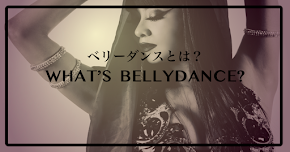 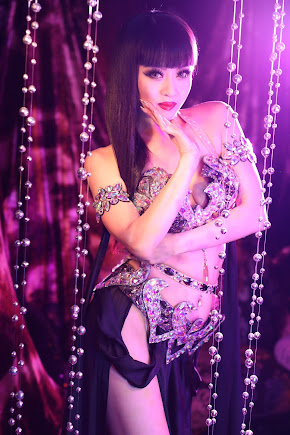 BOOK a Bellydancer for your Event! 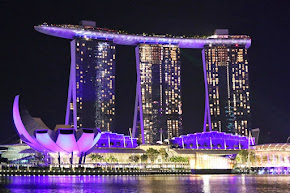 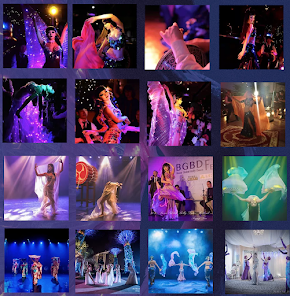 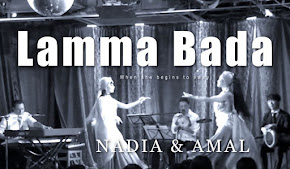 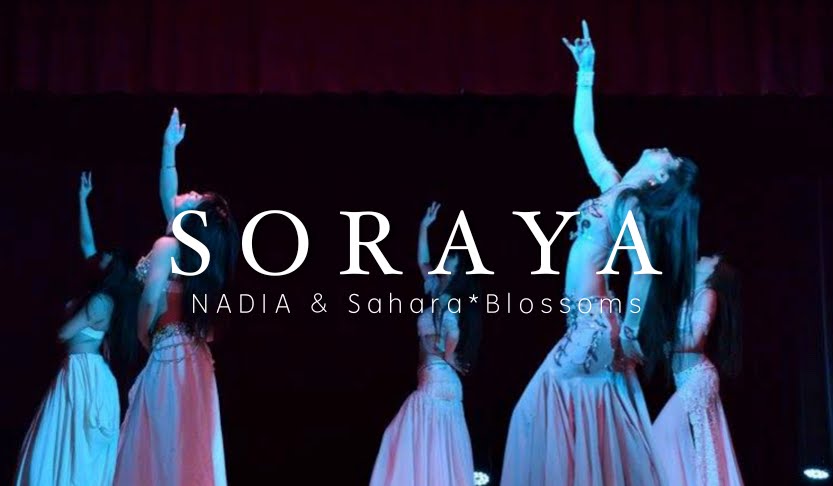 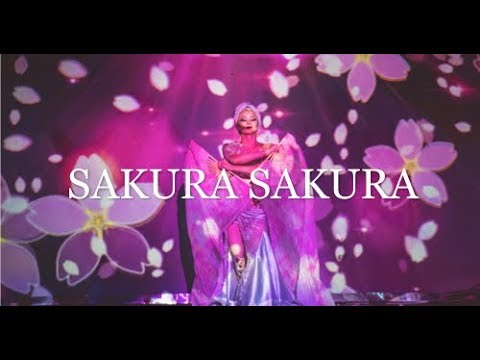 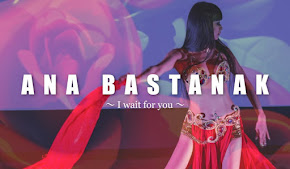 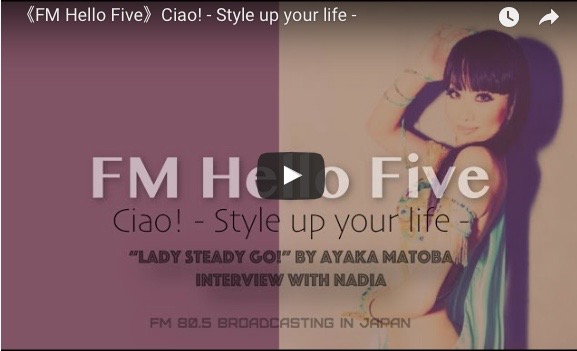